Most Romantic Movies Ever

You disliked this video. Thanks for the feedback!

Added 4 months ago by MiAmigo
10 Views
Hollywood’s greatest romantic movies don’t feature all cooing and kissing, if you think about it. Before Love Can Conquer All, there must be struggle, redemption, confusing mishaps, mayhem and sometimes a sinking boat.Thankfully, most of the best romantic movies of all time are still available to stream.

A Star Is Born
If you're looking for a story about people brought together by talent and torn apart by fame, you can watch a number of takes on A Star Is Born: There's the 1937 original with Janet Gaynor and Fredric March, the 1954 version with Judy Garland and James Mason or the 1976 remake with Barbra Streisand and Kris Kristofferson. But only the most recent one, with Lady Gaga and Bradley Cooper, has a performance of the heart-rending song "Shallow."

Moulin Rouge
Baz Luhrmann’s “Moulin Rouge!” is an unabashed tribute to truth, beauty, freedom, and love. The unexpected romance between young poet Christian (Ewan McGregor) and a Parisian nightclub courtesan Satine (Nicole Kidman) is both dizzying and heart-wrenching. The soundtrack is comprised of covers of popular songs that express their aching passion for each other. Unforgettable: McGregor’s gorgeous rendition of “Your Song.”

The Notebook
“The Notebook” is a classic tearjerker about a poor guy and a rich heiress falling in love despite being from differing social classes. Noah (Ryan Gosling) and Allie (Rachel McAdams) are unjustly separated for many years, which makes their ultimate reunion triumphant. The movie’s final, present-day scenes make it so special, causing audiences to reach for their hankies every time.

Shape of Water
If you know anything about Guillermo del Toro, then you know better than to ever try to predict what the fantastical director’s take on a love story would be. Besides, of course, that it will be more beautiful and unique than you could ever imagine. Shape of Water tells the tale of Elisa, a mute woman who works as a cleaning lady at a government laboratory, as she finds herself falling in love with the lab’s top-secret specimen: an amphibious creature. This film is a true testament that love comes in all shapes and sizes.

Eternal Sunshine
This film breaks all the rules for romances, starting after the central couple has already broken up. Joel (Jim Carrey), still reeling from heartbreak, seeks out a procedure that'll erase Clementine (Kate Winslet) from his memory. The resulting trip through his mind, and memories of his past with Clementine, result in something more poignant than a straightforward rom-com could provide.

Titanic (1997)
James Cameron’s “Titanic” was a formative experience for film-goers who couldn’t get enough of the doomed love story of Jack (Leonardo DiCaprio) and Rose (Kate Winslet). The difference in social class makes their story of star-crossed lovers all the more compelling as the romantic grandeur of the Titanic gives way to epic tragedy. “Titanic” tied the record for most Oscar victories , including Best Picture and Song .

Casablanca (1942)
You must remember this. The legacy of “Casablanca” continues nearly 80 years later, with new generations of film lovers gripped by Humphrey Bogart’s Rick still carrying a flame for Ingrid Bergman’s Ilsa, years after their Paris affair. Things become complicated when Rick must decide whether to help Ilsa and her new husband escape to America during the turmoil of World War .

Most Romantic Movies Ever 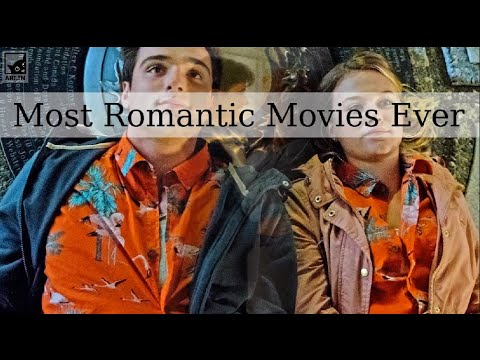 Hollywood’s greatest romantic movies don’t feature all cooing and kissing, if you think about it. Before Love Can Conquer All, there must be struggle,...